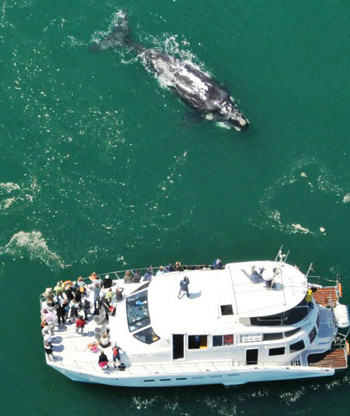 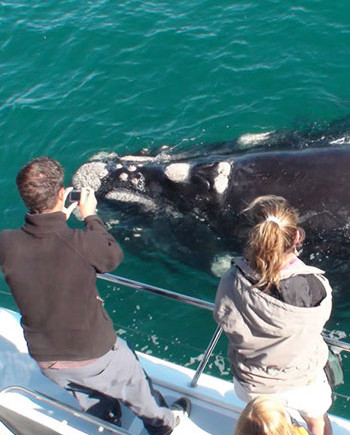 Are you ready for an early morning start and embark on a journey to Hermanus, a small town near Cape Town, known as the best place to do whale watching either from a boat or the cliffs on our seasonal tour offered between June and December?

If you answer is yes, then embrace the beauty of nature as well will embark on this whale watching journey to see the gigantic mammals in the ocean, the Southern Right Whales. Let one of the best whale viewing spots in the world expose you to the giants of the oceans, observe their motions as they move sequential and see the impact of their mass through the reactionary movement of the water as they move. Curious and enticed for interaction with the vessels the Southern Right Whales are beautiful creatures and a big presence in the Hermanus waters. Let the picture friendly town of Hermanus host, entertain, feed and amaze you with its beauty. The town will house you, the mountains offering spectacular sights and its sea refreshing breezes.

This picturesque whale tour takes you over the mountains to the seaside town of Hermanus. Set between mountains and the sea, Hermanus is not only very striking but offers some of the greatest land based opportunities for whale watching in the world. Close sightings of the Southern Right whale are likely. On the drive back we follow the coastline, which gives further possibility of whale and even dolphin sightings. A stop is made at Stony Point, near Betty’s Bay to see the penguin colony before returning back to Cape Town.

Stony Point Nature Reserve is home to one of the largest successful breeding colonies of African Penguin in the world.

Located in the quaint coastal town of Betty’s Bay in the Overberg, the Stony Point Nature Reserve is home to a unique colony of African Penguins. Stony Point offers the public the chance to see these wonderful flightless birds up close, via the boardwalk through the colony, which allows the public to observe the penguins go about their daily activities in their natural habitat, without disturbing or disrupting them.

Also present in the colony are three species of cormorant; the Crowned cormorant, Cape cormorant and Bank cormorant, all of which breed on the outer rocks. There are also Hartlaub’s Gulls and Kelp Gulls which forage in the colony, while the Rock Hyrax, more commonly known as the Dassie, can be seen on the surrounding rocks.

Upon our arrival in Hermanus at the New Harbor, you will be briefed about the Southern Right Whales by an experienced qualified whale watching specialist. You will be able to learn about their lives, life spam and behavior. Afterwards you will aboard the whale boat and embark on a 2 to 3 hour sea excursion in the search for the Southern Right Whales. As soon as a whale is spotted, the skipper will stop the boat so that you can see these amazing sea creatures up close. As the time goes by, the skipper and crew members will try to spot more whales to maximize a full whale watching experience.
The boats permits entitles us to approach the whales up to 50m and then we stop to observe and being naturally curious the whales normally approach the boat to observe us. This is truly an inspirational experience to be treasured.

Hermanus is a seaside town southeast of Cape Town, in South Africa’s Western Cape Province. It’s known as a whale-watching destination. Beaches include Voëlklip Beach and the broad Grotto Beach, overlooking Walker Bay. The Old Harbour Museum is a site encompassing the old harbour, a fishermen’s village and the Whale House Museum. The latter has informative displays and a suspended skeleton of a whale.

Sir Lowry’s Pass was named after Sir Galbraith Lowry Cole, Governor of the Cape in 1828. Today’s modern, cantilevered four-lane highway is a far cry from the original pass, which was recklessly dangerous and steep. Prior to the pass being built, all wagon traffic from the Overberg routed through the Franschoek Pass – the preferred route for many years with its kinder gradients for wagons and oxen.

Sir Lowry’s Pass is a lot more than a route across a formidable mountain range. It is also a haunt for bird watchers and nature lovers and the car park, on the western side of the N2 as one approaches the top of the pass, provides a perfect stop to explore the area. The mountain fynbos is fairly accessible here and one can take three to four hours to explore the mountain side and the lower areas where streams become densely vegetated and provide perfect cover for birds.

The summit provides one with the most awe-inspiring backdrops in the Western Cape – on a clear day you can view the range all the way from the southern suburbs of Cape Town. Today, Sir Lowry’s Pass allows easy passage across this daunting natural barrier.

The tour will start from your hotel as we prepare for beauty, adventure and joy that are all rewards of visiting Hermanus for this whale watching tour. We will continue the whale watching tour with a beautiful drive that will take us on to the N2 highway (National Road 2) through to Sir Lowry’s Pass with majestic views of the Hottentots Holland. From the start of Sir Lowry’s Pass all the way to the summit, approximately 450m above sea level, you can enjoy panoramic views over the low-lying white sandy beaches that stretch back towards Cape Town as we make our way towards the dream destination for a whale lover, Hermanus.
This sea side wonderland is a is located 120km from Cape Town and is a jewel of nature lovers and a dream for an adventurer as it has activities such as rock angling, paragliding and quad biking but the highlight of this tour is whale watching. Hermanus is the only town in the world that has a “whale crier” on duty during whale season and is the popular attraction on whale watching tours in the town. Stationed at a prime advantage point, the whale crier is able to spot whales and then sound his horn to let bystanders know that there are whales in the bay.

Upon our arrival in Hermanus at the New Harbor, you will be briefed about the Southern Right Whales by an experienced qualified whale watching specialist. You will be able to learn about their lives, life spam and behavior. Afterwards you will aboard the whale boat and embark on a 2 to 3 hour sea excursion in the search for the Southern Right Whales. As soon as a whale is spotted, the skipper will stop the boat so that you can see these amazing sea creatures up close. As the time goes by, the skipper and crew members will try to spot more whales to maximize a full whale watching experience.

The boats permits entitles us to approach the whales up to 50m and then we stop to observe and being naturally curious the whales normally approach the boat to observe us. This is truly an inspirational experience to be treasured.

Hermanus has a large number of whales visiting its shores during the whale season and the town also boasts a Whale House which will afford you the opportunity to enjoy the market square daily show for informative and educational displays of marine life in Walker Bay and to feed your eyes on the well conserved whale skeleton. An opportunity for land base viewing is aided by the cliffs edges of Hermanus with walk able paths which serve as an ideal viewing point for the surrounding waters. Hermanus is perfectly positioned to offer the best viewing directly from the shore.

After our whale experience in the town of the “whale capital” of the world we continue the whale watching tour with a drive to Betty’s Bay to view with a camera in hand, the endangered African Penguins at Stoney Point. Betty’ Bay also holds one of only three land based penguin colonies in South Africa. These cheerful, yet boisterous sea birds have been placed on the endangered list after seeing a 90% population decline over the last 60 years.
We will proceed the whale watching tour with a drive through Gordon’s Bay blessed with amazing sunset views and beautiful beaches for a scenic drive on Clarence Drive.

After a day exploring the charming towns and magnificent marine life around Cape Town we will return to the City Centre to take you back to your hotel.

Expand/Close
Do I need to book in advance?

Yes, we advise you to book well in advance to secure your place on the boat trip

When is whale season?

Whale season typically runs between June and November in the Cape, and each season large numbers of whales can be seen along the coast

What will I see on the whale watching tour?

Every whale watching tour is a unique experience and the sightings vary. Apart from the Southern Right Whales you will be possibly see Brydes Whales and Humpback Whales. There are many Cape Fur Seals, African Penguins, Dolphins, Sunfish and plenty of coastal marine birds that have been seen whilst out on the for the whale watching tour

Where is the best place to see the whales?

The Southern Right Whales are best to see along the famous Whale Route, which spans along the coastline passing Gordon’s Bay, Pringle Bay and Betty’s Bay en-route to Hermanus

What happens if the sea and weather conditions are not suitable?

Our staff constantly monitors the weather and will respond professionally to any changes. This may mean a tour is cancelled or safety restrictions placed on passengers with medical problems.

If my tour is cancelled, will I be transferred to the next one?

What should I wear for the whale watching tour?

What if I suffer from motion sickness?

If you are susceptible to motion-sickness you should take the necessary precaution prior to arrival according to the prescribed medication. All our whale watching tours are graded with a seasickness warning announced at the safety briefing prior to the tour departure

Why should we book the whale watching tour with you?

We want you to have a fun yet educational experience. All whale tours have proficient marine guides on board to answer your questions and share their vast knowledge of the ocean with you. Our objective is to adhere to responsible tourism guidelines and the emphasis of all the whale tours is on the conservation and the welfare of these amazing animals